We are honored to present a very special performance by K. Nominjin of Sri Chinmoy‘s song to Mongolia: Good Morning Mongolia. 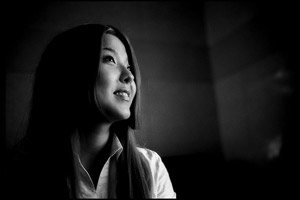 Deeldar Sedjav gives us some background notes on K. Nominjin, and how she came to sing Sri Chinmoy’s songs:

Her brief biography: She is a 19-year old Mongolian composer, a pop star with beautiful, yet powerful voice, and sings in 12 languages including fluent English.

She has worked with many professionals like Rupert Hine, Louis Banks, Sivamani, Stephen Tyler, Roger Love, Hans Ebert and others during her almost 10-year musical career. Her voice is featured in a remix of John Lennon’s Give Peace a Chance.

Not only is she an accomplished singer, but also a deeply spiritual person. According to her, she meditates 2.5 hours a day and that keeps her going amidst her intense workload as a professional musician. She has opened a vegetarian restaurant in Ulaanbaatar city and is a most avid practitioner of Quan Yin meditation.

Nominjin and her mother happened to visit the studio for Nominjin’s own recording while the studio was still working on Bayasgalan’s recordings. Upon hearing Bayasgalan’s singing of Sri Chinmoy’s songs, Nominjin and her mother were crying. She asked whose songs they were and expressed her desire to perform songs of that composer, i.e. Sri Chinmoy. Nominjin does not speak Bengali, but has spent five years in India and understands some Hindi.

Ariunaa contacted her afterwards and this new recording of Good Morning, Mongolia has become a reality. She came to perform in Ulaanbaatar Hotel last month in the same hall where Sri Chinmoy had functions, on the second anniversary of Sri Chinmoy’s visit to Mongolia, and expressed her willingness to participate in further musical projects of singing Sri Chinmoy’s songs.”

Here are the words to Good Morning Mongolia:

We are grateful to K. Nominjin for this wonderful contribution to Radio Sri Chinmoy.