Tales from the Mahabharata: The thirteenth year

The Mahabharata is India’s most famous epic, and is the longest of the world’s great epics, over 10 times the length of the Iliad and Oddyssey combined. This tale picks up at the beginning of the Pandava brothers’ 13th year of exile, and is told by Sanjaya Spettigue, who has been charming his fellow students of Sri Chinmoy with tales from the Maha 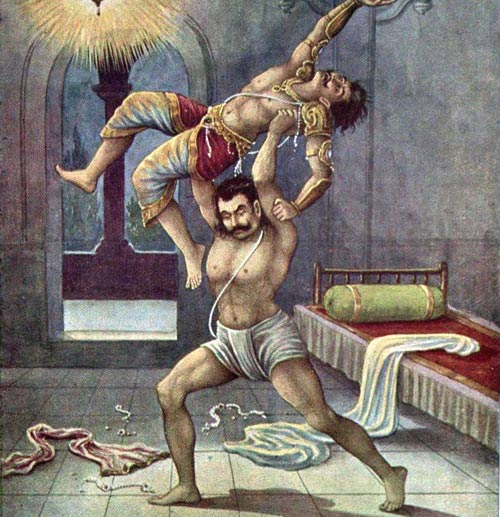 bharata for many years.

The Pandavas had been banished as a result of losing a game of dice to their cousins and rivals for the kingdom, the Kauravas, with the special proviso that the thirteenth year had to be spent completely incognito. If they were recognised during that thirteenth year, then they would have to go back into exile for another 13 years. Both this image and the one above are taken an old Hindi-language version of the Mahabharata. This one showing the various disguises adopted by the Pandavas in their 13th year, while the one above shows Bhima killing Kichaka.