This recording includes a concert by Sri Chinmoy given by the seaside, near the city of Davao Philippine, on the island of Mindanao, on January 12 1993.

Sri Chinmoy visited Philippines in January 1993, touching the hearts of the Filipino people with five Peace Concerts. He also composed several songs dedicated to the nation and its people.

Sri Chinmoy offered two peace concerts in Manila – one on Jan. 2 at the Manila Cathedral and one on Jan. 26 at the Philippines Cultural Center. Others were held at St. Theresa’s College, Cebu City, on Jan. 6; at Almendras Gymnasium. Davao City Recreational Center, Davao, on Jan. 15; and at Luce Auditorium, Silliman University, Dumaguete, on Jan. 21.

During his month-long peace tour of the Philippines, Sri Chinmoy met with the country’s top political and religious leaders. In Manila, he discussed politics and spirituality with President Fidel Ramos on Jan. 4 at Malacanang Palace and the two exchanged gifts. ‘We need the support of leaders like you for the peace process,” the President said. “I hope you can help in the Philippines.”

The spiritual teacher also spent time with the country’s key religious figure, Jaime Cardinal Sin, meeting him on Jan. 1 at Manila’s EDSA Shrine. During a return trip to the city on Jan. 27 the spiritual teacher paid a courtesy call on former Philippines President Corazon Aquino. Mrs. Aquino told him “If I have succeeded …. in restoring democracy and also strengthening that democracy, it was because of prayer.” 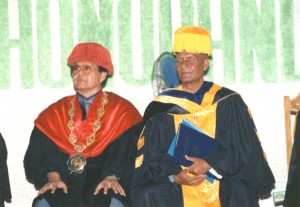 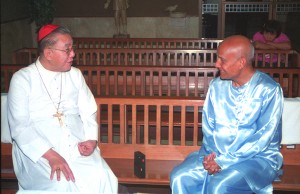