An interview from Japan with Pradeep Hoogakker, a member of the Sri Chinmoy Marathon Team who, in 2011, became the first Dutch runner to complete the Sri Chinmoy Self-Transcendence 3,100-Mile Race. 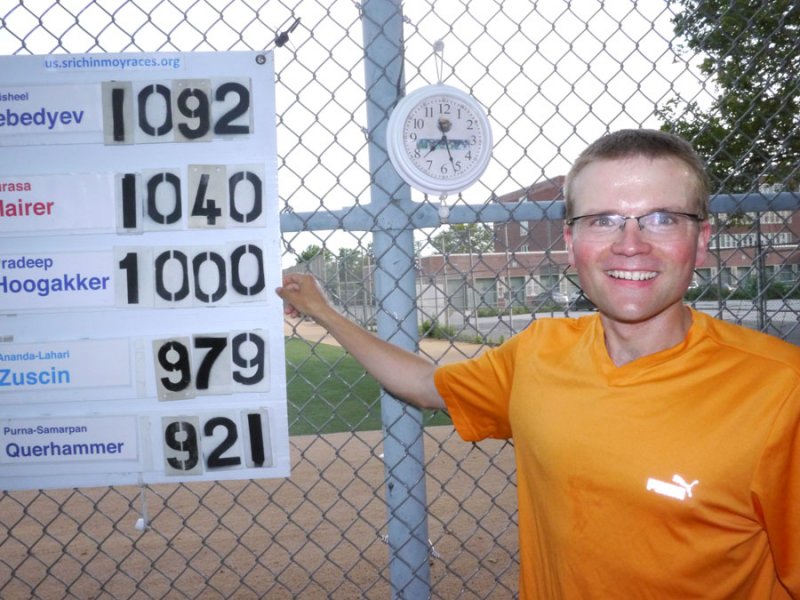 The runner-radio host was Ms. Wakabayashi, a well-known figure in the running world. She interviewed Pradeep (with translator) on KBS Kyoto Radio, Japan 22 October.

Waka: What brought you to the race?

Pradeep: One day, while I was meditating after having a good run, the idea of running the 3100 mile race spontaneously came to my heart and I felt inner thrill. I had been to the race a few times as a helper before. I got advice from the runners then, and trained myself for 6 years. I trained to run long distances, starting from 10km a day, 40km once a week, and up to 100km once a month. I also practised how to eat while running, as well as trying different running outfits and shoes.

Waka: And the actual race came. Didn’t you get bored running 5649 laps?

Pradeep: Everybody asks that question! Actually, many ultra races have loops instead of a straight route. It actually makes a lot of sense since you can have your own table where you can put your belongings such as shoes and supplements. Also, you feel everybody is running together—from the fastest to the slowest ones in the race. We can inspire each other, and we feel oneness, which is really good.

Waka: Still, it’s sooo long. How did you keep your motivation?

Pradeep: We told different jokes to each other!

Waka: What was most difficult?

Pradeep: The first 10 days were really difficult. My feet were not used to running on concrete; at night, my whole body ached and could not sleep. My mind started thinking, “How can I run tomorrow being like this?,” which made me sleepless. But as weeks went by, I learned that I could run even if I had not been able to sleep the night before. Something within myself recovered with renewed energy.

We have 297 other pages containing uploaded tracks by Sri Chinmoy Centre. View all pages »