On April 15, 2014, at the Skirball Center for the Performing Arts in New York City, the Sri Chinmoy Centre offered a special edition of its “Songs of the Soul” concert series.

This concert was dedicated to the celebration of the 50th Anniversary of Sri Chinmoy’s arrival in the West on April 15, 1964.

Dear listeners, it is with great joy and pride that we bring you these spiritual and musical offerings from the 50th Anniversary Tribute Songs of the Soul Concert at the Skirball Center for the Performing Arts in New York City.

Here are some welcoming words by Homagni Batista, one of the concert organizers:

"This Tribute Concert marks the 50th anniversary of Sri Chinmoy's Arrival in New York. It was the hope of the concert organizers to create a special evening of celebration  to honor Sri Chinmoy's service to humanity. The concert program featured arrangements of Sri Chinmoy's music as well as songs dedicated to his extraordinary life. The spectacular and  heart-felt opening to the concert was a piece composed entirely by Paree Atkins and performed by members of the Sri Chinmoy Center. Half way through the evening the London-based Sahadeva Orchestra offered a dynamic and inspirational Medley of Sri Chinmoy’s compositions.

The concert evening culminated in an amazing performance by Sri Chinmoy's musician brother friend, Boris Purushottama Grebenshikov. This poet laureate of Russia brought down heaven to earth with is smokey tenor voice and devoted heart.
We hope you enjoy listening to the recordings from this unique evening."

The first track is titled 50 Years- the Golden Boat, and it is an original composition by Paree Atkin. Here is the text of the lyrics of this wonderful piece of music:

A musical tribute celebrating the 50th Anniversary of Sri Chinmoy’s
Arrival in the West.
by Paree Atkin
April 2014

Fifty years ago He let the horn blow,
As the winds took hold His Boat of shining gold.
Flying high in the sky, as golden as His Dream,
Was the Victory-Banner of His Beloved Supreme.

Safe at His Feet as we sail to the Goal
You can feel the heartbeat of the American soul
Shining bright in her sweet and significant role in His Play
On this April day.
It’s always great to celebrate the Fourth of July,
And we love to watch the fireworks in the sky,
But there’s a new kind of freedom for which we cry,
And that’s why

He had to fly across the sea,
Straight into the heart of NYC,
With the flaming truth of Liberty.
There’s a new golden day in American History —
When He walked upon this shore
On April 13th, 1964!
All aboard!

The second and third tracks are parts 1 and 2 of a musical piece performed by Purushottama Boris Grebenshikov, the “Grandfather of Russian Rock”. 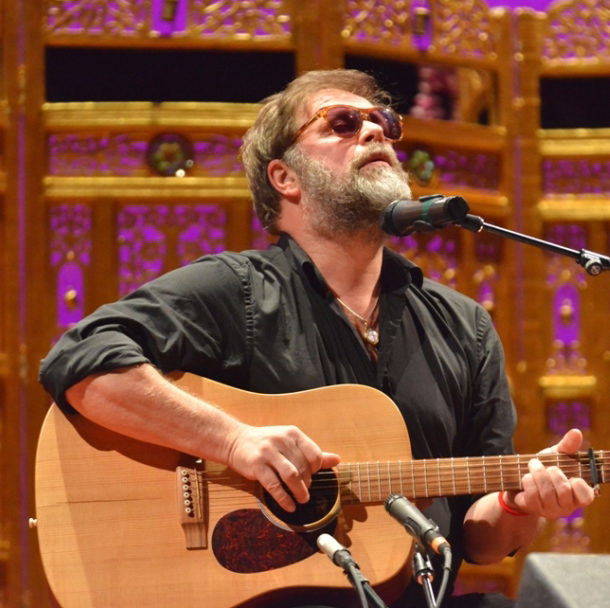 In this concert he performed, along with Sri Chinmoy’s disciples, a traditional Indian mantra in honor of the Goddess Saraswati, the Mother aspect of God that presides over the arts and learning. 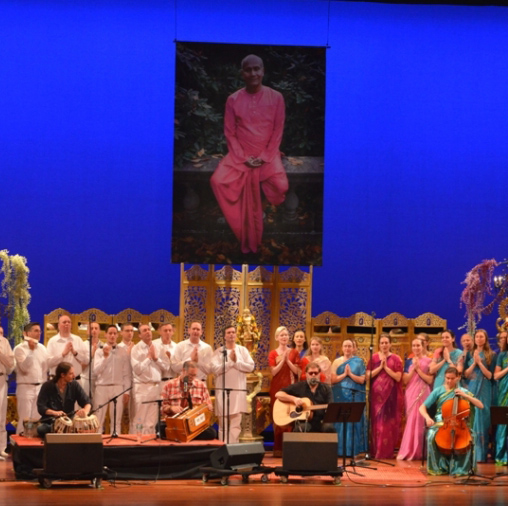 Last, but not least, a magnificent arrangement of Sri Chinmoy’s songs by Sahadeva Torpy, performed with a choir and orchestra. Sahadeva has toured the world as part of the ensemble of performers/arrangers for the Songs of the Soul concerts. His talent as a pianist, singer and arranger is immeasurable. 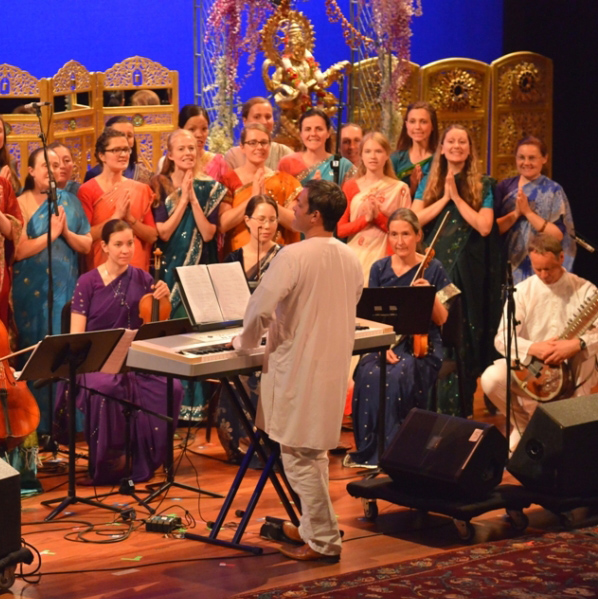 His arrangement for this concert includes both excerpts from Sri Chinmoy’s songs as well as his own words. This piece by Sahadeva is an artwork of great calibre and weight; when I first heard it, the harmonies were so new to me, and the production of such weight, that it challenged my perception of what I usually consider soulful or spiritual or beautiful. But the more I listen to it, the more I feel its inherent beauty; it becomes more self-evident to me, to the point that I wonder how on earth I could not fully appreciate it when I first heard it. It is a piece of both great power and beauty, and extremely soulful and sweet at the same time.

I am reminded of Beethoven, who in his time faced so-called failure, when his symphonies were rejected after their première, for the listeners were facing a newness of gigantic proportion and force.

But this is a normal reaction to great and new music; it challenges the boundaries of the mind. It comes from a world of intuition. Ultimately, the arranger/composer feels that he has received this music, that is has come from a higher place. The arranger/composer becomes  a listener. The more keenly he can “listen” to this music from the higher worlds, the better will be his manifestation of such a reality. In the process of creation, there is an elevation of the artist; the artist feels uplifted by this gift from the world of the soul. And this upliftment gives a great sense of joy and beauty, of happiness and gratitude, and the desire to share this beauty and joy arises in the heart of the artist.

And for us, the listeners, the experience of hearing it ultimately elevates us, as music is the most intuitive sharing of the spiritual reality in the world of sound. These feelings elevate us to a higher level of perception, they ennoble the human spirit and remind us of our source.

This is the text for Sahadeva’s piece:

I want to end by thanking all those involved in this beautiful and powerful concert. From the sound crew (the best we have ever worked with) to the organizers, volunteers and performers, the feeling was clear: a beautiful, soulful  and powerful musical and spiritual offering, a fitting tribute to the 50th Anniversary of Sri Chinmoy’s arrival in the West.