This is the first published album of Agnikana’s Group, entitled “Bhagaban’.

It offers a devotional and meditative arrangement of Sri Chinmoy’s music, featuring 16 tracks composed by Sri Chinmoy.Agnikana’s Group is based in Czech Republic, Central Europe and since their debut album have toured frequently around Europe and also to Asia and America.

In Sanskrit, ‘Bhagaban’ is an epithet for God. To some Bhagaban represents a devotional aspect of God, e.g. Krishna. Others see Bhagaban (Bhagavān) as representing the concept of the abstract God.

Agnikana’s Group sings and plays Sri Chinmoy‘s music with heartfelt devotion. When I listen to their “Bhagaban” CD, I feel both peacefulness as well as a fresh, youthful enthusiasm. We hope to hear more from this group in the near future. 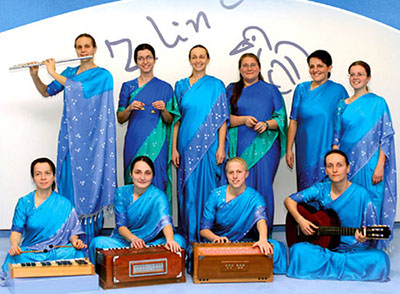 We have 17 other pages containing uploaded tracks by Agnikana's Group. View all pages »