Over his lifetime, Sri Chinmoy composed over 23,000 songs. Out of those songs, there are perhaps several hundred which have emerged over the years as ‘favourite’ songs, and which are commonly sung at our twice-weekly meditation meetings all over the world.

Here we present a playlist of 20 of these songs, arranged and performed by Sri Chinmoy’s students.

Students of Sri Chinmoy have formed Sri Chinmoy Centres in over 50 countries all around the world in order to further their own spiritual progress, and also to organise events to serve the wider community. Twice a week (on Wednesdays, and usually on Sundays) members of the Centre meet together for meditation. Singing forms a big part of our meditations, and many centres have talented musical members that select songs from Sri Chinmoy’s 23,000-song œuvre for the people in that Centre to sing. Since Sri Chinmoy’s musical output is so vast, often it is the case that a member of a Centre in New York, for example, will know songs that a centre member in Tokyo will not know, and vice-versa (Although there are people dedicated to learning all 23,000+ songs, but that’s a whole other story).

Fortunately, there are many songs that are quite popular in all the Centres, and we aim to highlight some of these here. Often Sri Chinmoy would select favourite songs from a group of his recently-composed songs, or he would remark on the spiritual benefits that singing certain songs would bring. (It should be noted that there are a whole other set of songs that Sri Chinmoy recommended we sing every day as part of our own daily meditation practice; maybe one day we will get around to making another playlist for those songs.)

Many of these songs are in Bengali, which is Sri Chinmoy’s native tongue. It is descended from Sanskrit, the ancient Indian language of spirituality, and from Pali, the language spoken by the Buddha. In more recent times, it was the language used by great Indian spiritual figures such as Sri Chaitanya, Troilanga Swami, Sri Ramakrishna and Swami Vivekananda. It was the native tongue of India’s most famous poet, Rabindranath Tagore, who in 1913 became the first non-European to win the Nobel Prize for literature. Bengali is spoken in the north-east of India and in Bangladesh, and is one of the ten most widely used languages in the world.

Of course, learning these songs can be difficult for Westerners – our advice at the beginning is to not even try to learn them; just enjoy the music and the words will begin to sink in. To make things easier when teaching these songs to his students, Sri Chinmoy did not use the Bengali alphabet, but instead a phonetic Roman alphabet. 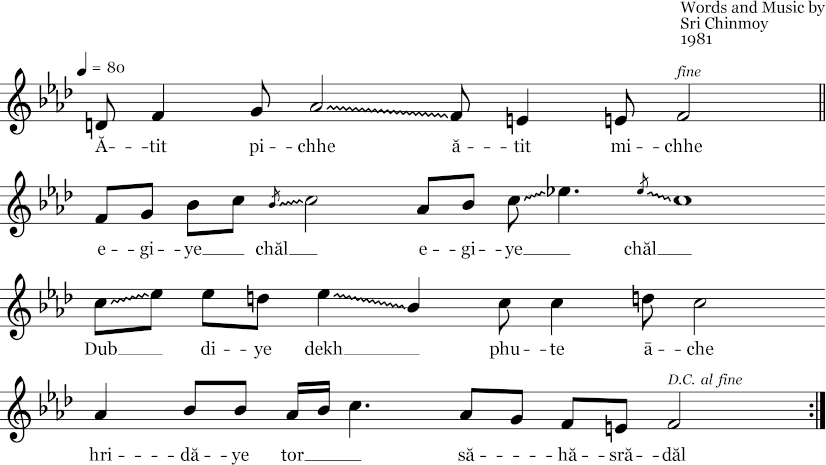 We have 296 other pages containing uploaded tracks by Sri Chinmoy Centre. View all pages »