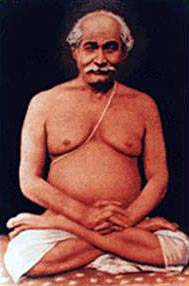 This week we feature the true stories from the life of Lahiri Mahashoy. Taken from Sri Chinmoy’s book entitled ‘A Revelation of the Beyond’ these stories offer wondrous insights into the life of a spiritual master. He lived in 19th century India and for many years worked as a clerk in the Military Engineering Department of the British Government and was married with two sons and three daughters. However in his thirty-third year he met his Guru Babaji and was initiated by him into Kriya yoga, eventually becoming a great and revered teacher himself.

Shyama Charan’s First Meeting With Babaji
In this story Lahiri Mahashoy then known as Shama Charan is introduced to his Guru while he is wondering in the Himalayas. A young sadhu approaches him abundant affection and says ‘Can you not recognise me, my child, my son?’

The Conquer Of Space And Time
One day during his work as a clerk Lahiri Mahashoy’s boss appeared sad and depressed. The problem turned out to be with his wife who was ill in England, but Lahiri was able to offer him some good news.

High Time To Wake Up
A short story about the moment when Lahiri Mahashoy initiated his wife Kashimani as his student. In the middle of the night she awoke to find her husband not in his usual meditation spot.

Troilanga Swami’s Words Prove To Be True
One day Troilanga Swami was with his students on the banks of the river Ganges when a middle aged Bengali gentleman approached him. Wearing a new dhoti and perfumed with oil this gentleman embraced the swami much to the horror of his students.

The Master Returns To His Real Home
On September 26th, 1895 Lahiri Mahashoy was extremely sick. All of a sudden he stood up and said, “What am I doing here?… It is high time for me to go back to my real home.” And he entered into a very deep state of meditation.