The Memories of Ancient India

The Memories of Ancient India is a unique short album where Sri Chinmoy sings spontaneously, without words. It was recorded in Cambridge, England, in 2003, shortly after a visit to King’s College. 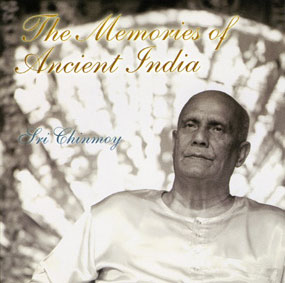 Earlier in the day, Sri Chinmoy had met several professors from Cambridge University and honoured them in a ceremony entitled ‘Lifting Up the World with a Oneness-Heart.’, an account of which was later released in a book entitled The mind loves the heart, the mind becomes the heart, part 2 (view at Sri Chinmoy Library). That day, Sri Chinmoy also visited the room where Sri Aurobindo used to stay when he attended Cambridge University.

The recording took place later that day when Sri Chinmoy was meditating with his students. Sri Chinmoy began singing as people were still coming into the room where the meditation was taking place – you can hear people talking in the background, and after a few minutes, you can hear a microphone being moved into position. There is nothing really like it in Sri Chinmoy’s considerable musical ouevre; it has sometimes been compared to Indian classical dhrupada singing. Sri Chinmoy later gave the title for this unique recording as “Memories of Ancient India“.

Notes on album
by Kamalakanta Nieves

In this unique CD, Sri Chinmoy improvises melodically, without any words. At the start of the recording, his improvisation is similar to one of his own melodies, he soon launches into melodic freedom, offering us thirteen minutes of pure vocal music, free, unbounded by meter, words or rhythm. This and other similar performances by Sri Chinmoy show his absolute spontaneity at its best.

Our gratitude to Sri Chinmoy for this soulful offering.

We have 72 other pages containing uploaded tracks of Sri Chinmoy singing his compositions. View all pages »