Five of the best tracks from the recent album by Mountain Silence entitled “Silence Peace.” Mountain Silence is an all-female ensemble based in Switzerland and is focused on performing the music of Sri Chinmoy. Over the past two decades, they have produced several albums.

They use a mixture of eastern and western instruments to create a meditative and soulful atmosphere that has been appreciated by audiences around the world.

In this selection, the five tracks include the Bengali song Ogo Ananta, the poetic lyrics of this song is

O endless Beauty,
O Sun of my aspiration-heart,
Awake, awake, awake!
You are my hope-sea;
I am Your Compassion-moon.
O Eternity’s Smile-Beauty
Give me Your sweet and melodious
Soul-stirring flute.

The song is from the songbook Supreme, make my life a gratitude-flood, (1976) 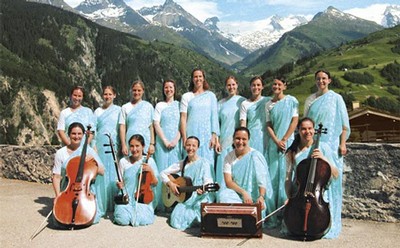 We have 14 other pages containing uploaded tracks by Mountain Silence. View all pages »