We are honored to publish today the performance of Rezwana Choudhury Bannya at the recent Songs of the Soul Concert offered on August 28, 2009 at the Skirball Performing Arts Center in New York City. She was accompanied by Tapan Modak (tablas) and Premik Russell Tubbs (flute). 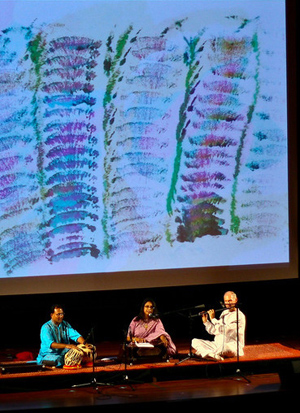 And with great delight that we announce that the members of the Sri Chinmoy Center Gandharva Loka Orchestra will join with Ms. Choudhury and her students in Dhaka, Bangladesh on December 13th to perform an ensemble choral and solo concert:

We offer our deepest gratetude to Rezwana Choudhury Bannya for her momentous contributions to music through her singing and her music school, and also for the generosity of her heart, which has embraced Sri Chinmoy’s songs and offered them to the world at large. We shall forever remain indebted to her, and wish her an ever greater success in her artistic endeavors.

For those of us who love Sri Chinmoy’s music, it is indeed a great honor and a blessing to hear his songs performed with so much love, sweetness and devotion. Indeed, Rezwana Choudhury Bannya exalts these songs with the greatness of her talent.