In this live recording from 1974, Sri Chinmoy sings a composition of Rabindranath Tagore’s – “Samukhe Shanti Parabar.” (‘The Ocean of Peace Lies Ahead of Me’) Sri Chinmoy performed this song live on 27 June 1974 after giving a talk entitled “Death” at Newcastle University, UK. 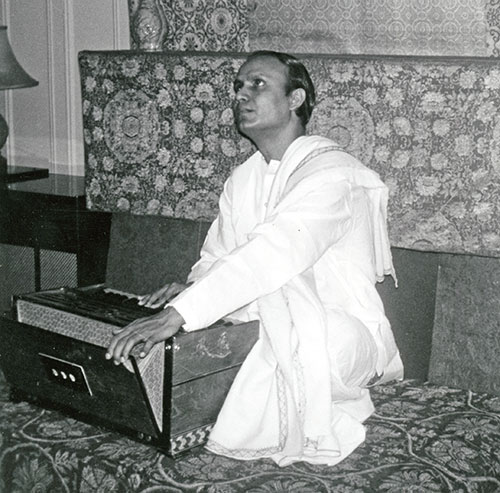 The recording was made using tape cassette. Although technically the sound is not perfect, we hope this recording captures the profound soulfulness and depth of the performance

The song “Samukhe Shanti Parabar” (‘The Ocean of Peace Lies Ahead of Me’) was composed by Rabindranath Tagore in 1939. Tagore requested that the song be sung at his own funeral in 1941.

Sri Chinmoy’s talk on death from 1974 began with the words.

“Dear seekers of the transcendental Truth, I wish to give a talk on death. What is death? Death is the immortal pilgrim’s short rest along the road of Eternity. Death is a necessary experience for human beings at the present state of their evolving consciousness. Death is a shattering blow for desiring human beings and, at the same time, it is an awakening hand for aspiring human beings.”