Dear listeners, we present you with a soulful performance by Silence and Sound, from March 28, 2015 at Aspiration-Ground, New York.

“Silence and Sound” duet – Kushali Tarantsova and Rageshri Muzychenko – has been 15 years old by now. Kushali plays the violin and the guitar. Rageshri plays the synthesizer, different types of bells, and a small African drum. During the concerts we also play “the rain stick.” Kushali has got a degree of Donetsk Conservatory (violin class). Rageshri deals with medicine; she studied music in musical studio (piano class).

All our concerts are dedicated to the most inspiring music of Maestro Sri Chinmoy and we also perform classical music.

The music of soulful heart that we perform conveys both ancient and modern trends – a unique synthesis of meditative oriental melodies and rich polyphony of Western classical traditions.

The concert programmes include our own instrumental arrangements and original Maestro’s songs composed in Bengali, English and Sanskrit.

For seven years we have been performing in different cities and towns of CIS and abroad. By this time we have given about 1000 spiritual music concerts. We also perform music of Ukrainian composers in New York. We have visited more than 200 cities.

Like Sri Chinmoy, we do not take any payment for our concerts, they are complimentary.” 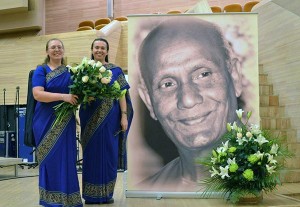 We have 5 other pages containing uploaded tracks by Silence & Sound. View all pages »