The Summit Song of Self-Transcendence

This CD is of great historical note, for it is a recording of Sri Chinmoy’s first pipe organ performance. Throughout his musical career, Sri Chinmoy played many musical instruments, including violin, esraj, cello, flute, piano and many others. 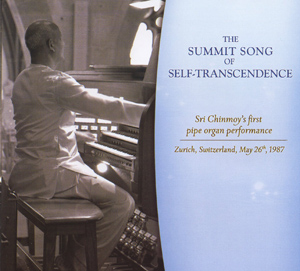 But the instrument that gave him the most musical fulfilment was the organ.

Indeed, Sri Chinmoy’s performances on the organ do justice to the majestic nature of this instrument. Sri Chinmoy’s organ performances are mostly improvisational; once in a while he will play a few of his melodies in the course of a performance. His improvisations on the organ have a cosmic, expansive feeling to them, as if one is travelling throughout vast, universal spaces. They are at once subtle and powerful. peaceful and dynamic, sublime and massive in their sonority and undertaking.

The richness and variety of this performance is so encompassing, that the listener will derive great joy and delight from it, no matter how many times he/she listens to it.

We are grateful to Sri Chinmoy for this soulful and illumining offering.